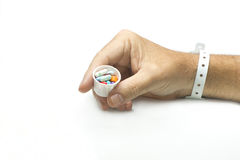 In the summer of 2001, I overdosed multiple times.  Some of these stories are described in other blog posts.  After the last of that series of suicide attempts, my psychiatrist put me on a Form (sectioned me, 72 hour hold).  He refused to release me from the hospital unless my parents came to collect me.   I remember my father driving down to pick me up.  I don’t really remember being released, but I ended up back home at my parents house, many hours away in another city.   The past few months felt like a bad dream.

I remember my parents had hidden all the pills in a bag in their bedroom closet.  I remember that there wasn’t a lot of trust, and for good reason.  I tried to relax, but the thoughts of self harm were propelling me forward.  I was caught in a vicious cycle, medication induced self destruction.  I would feel unsafe, hurt myself, go to the hospital seeking safety…then after a few days panic, feel trapped and beg to be released.  It went on over and over.  I always wanted to be where I wasn’t, I was chasing the feeling of safety, of quiet in my mind, of escape.

I remember walking up to the plaza by my parents house.  I bought an exacto knife at the dollar store and sneaked it into the house.  I was always buying, hiding, and throwing away tools during those years.  I often hide them in various places for safe keeping.  Intellectually I knew that having them in the house was the opposite of safe, but somehow their presence simultaneously calmed and panicked me.   It’s rare, even today that I don’t have something hidden.  Even though I don’t use the tools, I sometimes feel compelled to buy and keep them.   Sometimes I’ve called friends and asked them to help me throw them out.  I’ve handed them over to therapists and doctors.  I’ve hidden them and felt ashamed.  Even writing this brings up a feeling of shame inside me.  This is the power of addiction, the constant push and pull between the promise of safety and the threat of disaster and destruction.  Back then, I thought I was in control.  I thought the cutting kept me in control, but in reality the urges controlled me completely.

I had the knife at my parents house, I cut myself with it.  Deeply, but not deep enough to require medical attention.  I told my parents and asked them to take me to the hospital.  I told them I felt suicidal and I wanted help to control the urges.  I remember sitting in the ER waiting room, in a different city.

I don’t remember everything that happened.  I remember talking to a Dr, I was sitting on a stretcher, it wasn’t a special psychiatric emergency, just a regular bed.   The doctor agreed to admit me.  Then nurses came and gave me a gown, they took my clothes and items and put them into a white bag with a plastic drawstring labelled “patient belongings.”  This was different, the anxiety began, “why are they taking my things?”  Apparently this was the protocol at this hospital.

I was taken up to the 4th floor, to the Mental Health Unit.  It was a different layout and different style that the hospital I’d been in only a few days before.  It seemed larger and was laid out more like a large rectangle, rather than a long straight line.   I was shown to my room.   Outside the room was a cupboard and the nurse locked my things in there.   I was allowed to keep my teddy bear, but not my clothes.  In this hospital there were 2 beds to a room and each room had it’s own bathroom with a toilet and shower.

I stayed in the hospital for a few days.  It was the last week of June.  A few friends came to visit me.  I was given my clothes back and allowed to leave the hospital on passes.   During one of the passes I went to visit the psychologist who had treated me as a teenager.   To be honest the appointment was not helpful.  I don’t think she had a good understanding of me.  She didn’t understand why I was sick (because I’d been abused) and she didn’t understand why I was cutting myself and suicidal (because of the abuse and the medication cocktail).  I felt that she shamed me and threatened me to stop my acting out.  I don’t really remember exactly what was said.  I only remember feeling desperate when I left.  I think my parents dropped me back at the hospital.  I was in the lobby of the hospital, where there was a pharmacy and I considered buying a giant bottle of the medicine I had been told would kill me if I overdosed again.  I felt hopeless.

Somehow I managed to go back upstairs to the ward without incident.  I remember a few days later I wanted to leave, as was my usual pattern.  It was the weekend, I believe it was July 1 and I wanted to go home to see the fireworks.   I did as I would have in the other hospital, starting convincing them I was okay.  But somehow it backfired.  They didn’t believe me and they said I couldn’t leave until my doctor returned the next day.  I started panicking and becoming angry.   They told me they were holding me involuntarily because they thought I would just leave.  I was crying and banging my head.  I went into the washroom in my room, took off my earring and scratched my skin with the sharp end.  It wasn’t even enough to draw blood, just to cause pain and leave angry looking scratches on my body.   I remember being at the nursing station.  I was given a cup with liquid medication inside.  I was told it was Nozinan, a medication I’d used for panic before.  I drank it and soon after I realized something was wrong.  I became extremely drugged and when I asked the nurse had given me 5 times my usual dose.  They took away my clothing again and gave me a hospital gown.

Before I fell asleep or settled into my bed I realized what had happened.

They didn’t want to deal with my acting out and so they drugged me.

I felt betrayed, I felt scared.  I felt like I couldn’t trust anyone and I felt like my life was out of control.

The next day my doctor returned and agreed to release me.  The only useful part of that hospital admission was the doctor switched my medication to one that I still take today.  One of the few I’ve found over almost 20 years that actually makes me more, rather than less, sane.   For that I was thankful.

I soon went back to my home.  The cycle continued.  Looking back I realize an important lesson.  It’s not possible to keep someone else safe.  If someone is determined to harm themselves they will find a way.  Short of restraining someone and drugging them, it’s impossible.  The person has to want to help themselves, and they have to find both a purpose for living and a direction to move toward.  A goal, a passion, a reason to fight.  This is unique and can’t be forced or given to someone.  Believing in myself happened over time.  The psychiatric system is a crisis management system and nothing more.  The true help I’ve received over the years has come from other places entirely.