Today is the International Day of Trans Visibility and this morning I saw this piece of art in my social media feed. 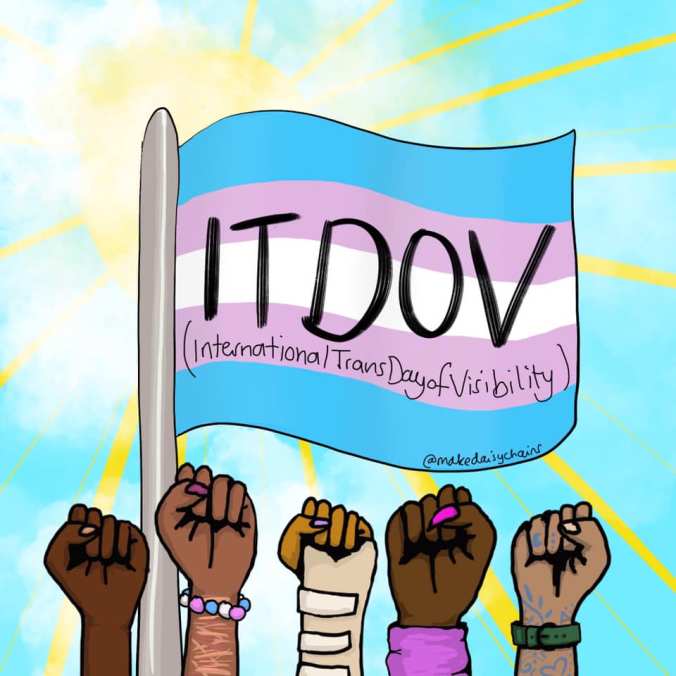 It was created by an artist Hannah Daisy @makedaisychains (photo credit to her.  https://www.patreon.com/hannahdaisy)

I felt deeply moved by the image and spent most of the day thinking about it.   Why did this image impact me so intensely?  As a non-binary person who has scars from self harm, I felt represented and valid in a way that I didn’t even realize I needed.  In this image, the arm with scars is just one in a series of different and unique arms raised in an empowered fist.   It is SO rare to see art that includes self harm scars that neither stigmatizes, sensationalizes nor glorifies self injury (and cutting specifically).  In this art piece, the self harm scars are matter of fact but are not the focus of the image.  The scars are shown as healed/healing and thus represent a hopeful message of recovery and life after self harm.  The image implies that recovery is possible, but also depicts the reality that mental illness is not always an invisible illness.  It shows that scars do not have to be hidden and can be accepted as part (but not the defining aspect) of a person.  This image does not show the person who self harmed as an object of pity or of revulsion.  It doesn’t make me feel sorry for the person, it makes me feel that they are a SURVIVOR.

As a person who has a multitude of scars from decades of self harm, I needed to see this. I needed the representation SO much. I needed the message that I’m not shameful, disgusting, broken, crazy, insane or violent.  I needed the message that my scars do not define me.  I needed the message that SOMEBODY out there, an artist, sees my scars as a sign of strength, resilience and SURVIVAL.  I don’t want to feel ashamed of my scars.  I don’t want to feel judged by society.  I don’t want to receive stares of pity or confusion on a summer day.  I want to choose my clothes based on what feels comfortable, not based on what will hide the scars and keep me safe from stigma.   Because there is an intense amount of societal stigma associated with self harming behaviour (and cutting in particular).  It is misunderstood, even by mental health providers.  It is often treated as a contagion, something that will spread like a virus to others.  It often leads to exclusion and intense self hatred/shame/guilt and isolation.  It is almost always portrayed as entirely undesirable and destructive, never acknowledged as a complex, coping mechanism that has often helped a person survive extremely difficult times when they had few other options to survive.   Self harm is almost always conflated with suicide, when often  people who self injure are doing so as a way to stay alive and to cope with hopeless, intense or overwhelming emotions.  (Self harm and suicide can go hand in hand, but not always).

I felt seen and I felt valid.  I can’t remember the last time a piece of art made me feel so  affirmed and understood.

Later in the day, I was scrolling through social media and saw the same image on another website.  But this time the image was altered: 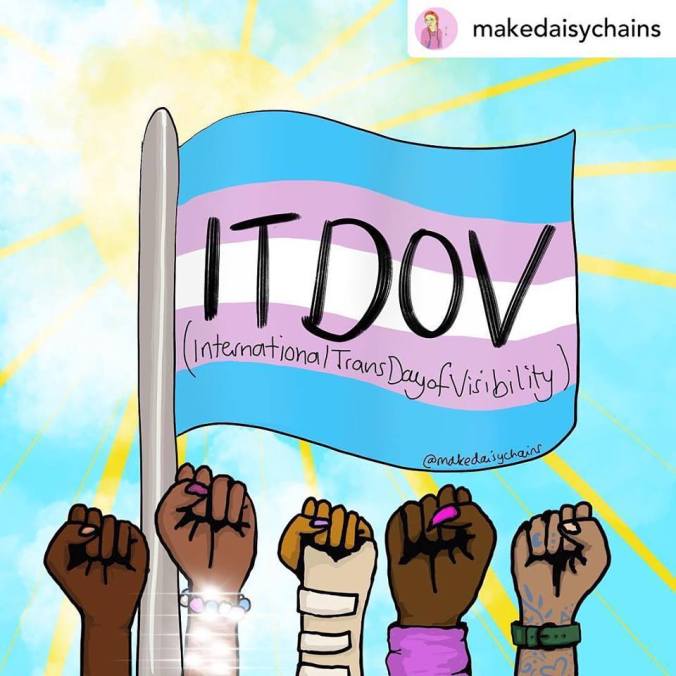 In the second image, the scars are censored.  They are replaced with what looks like the reflection of white lights or stars.   This second image made me feel erased, ashamed and frustrated.   I can understand that the website might not want to trigger folks and it might not want to be seen as “promoting” self harm behaviours.  I can understand why someone might think censoring the image was in the best interests of the public, but as a person who self harms, I completely disagree with the censoring.

I didn’t feel triggered by the first image, I felt REPRESENTED.  As I mentioned, I don’t believe the image in any way glorified or promoted self harm.  I saw the image as respectfully acknowledging the fact that many trans and gender diverse struggle, in a large part because of transphobia and lack of acceptance, with various types of self harming behaviours.   That doesn’t mean that we are weird, odd, crazy or broken. It means we are surviving.

What this censoring means to me?

It means that the people running the second website think I should hide my scars, that they are a bad influence on others or that they might make people uncomfortable.  It makes me feel that I should be invisible or deserve to be invisible. It makes me feel that self harm is SO terrible that it needs to be blotted out and erased, replaced with stars and light that won’t make anyone uncomfortable.

Does that mean that my existence makes you uncomfortable?

Should I be ashamed and hide myself away?

Is my mental health disability SO unpalatable to others that it needs to be censored?

If today is International Trans Day of Visibility, I think that means ALL trans and gender diverse folks deserve to be visible (if they want to be) and that includes trans folks with mental, physical and invisible disabilities.  We have to work from an intersectional perspective that does not erase the various lived experiences of people.  Representation DOES matter.  People with disabilities so often lack positive, affirming and realistic representations of ourselves in media, art and society.   Representations that neither treat us like inspirational stories nor tragedies.

Because we are SO much more than that.