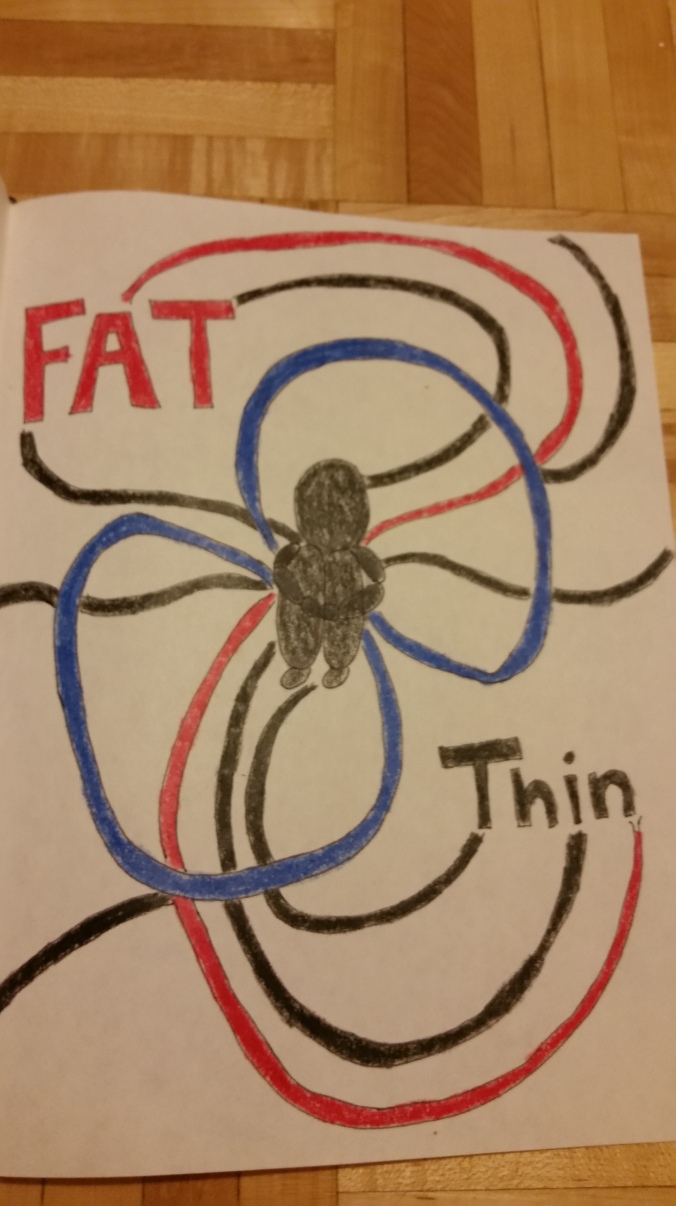 One of the worst parts of living with anorexia is also the part that is the most difficult for others to understand.  Body dysphoria or distorted body image.

In the context of an eating disorder, and in my own case, this basically means that I’m never really sure if I’m seeing my body accurately or not.  When I look in the mirror sometimes I see a lot of things I don’t like.  I don’t like the majority of the middle of my body for example.  Lots of people can relate to that.  But for me what I see in the mirror can sometimes change dramatically from one day to the next.  Sometimes I look at myself and I can see the parts of me that are slim, sometimes thin even.  But when I’m stressed, upset or triggered I see myself as big…too big…taking up too much space.  I hate the way certain parts of my body look and feel.  I get upset at the feeling of clothing touching my body and I sometimes have to change my clothes a few times in the morning before I feel okay to go out.

Distorted body image and body dysphoria are symptoms of many eating disorders.  Eating disorders are medical illnesses.  You don’t have to “look sick” or be extremely thin to be medically at risk from an eating disorder.

Sometimes I want to scream because if I could get rid of Ana and live a “normal life” around food my days would look very different.  I don’t want to waste even one more minute obsessing about my fat stomach, or how much I should or shouldn’t eat.

I’ll tell you something about Ana…she is a total bitch.  She is also incredibly boring.  Probably the most boring person I’ve ever met.  Ana is abusive too.

Who is Ana?  She is my eating disorder.  I personify her and I experience or imagine her as a young girl, maybe about 15 years old, with dark hair and pale skin.  She never looks happy and she is never satisfied.  She’s often full of rage and full of anger and she seems to want to destroy the both of us.

“Your stomach is fat. You are out of control.  You are so disgusting. You don’t even deserve to be alive.  You probably shouldn’t eat very much because it’s the only way you will feel better.”

Ana lies. Ana is cruel.  I’ve been living with her for almost 20 years now and she rarely gives me much of a break.

Because of Ana I have a hard time remembering what it is like to eat and feel relaxed, just enjoying the flavours.  I have a hard time imagining eating without obsessive thoughts and rituals.  Ana has this idea that by controlling food and controlling the size of our body she will solve all our problems and make us feel in control and safe.

Ana wants to be safe more than anything.  Unfortunately, she is young and she doesn’t know that controlling food makes her MORE at risk, more vulnerable and certainly more unhappy.

If I could live one day without Ana…

But even knowing all this intellectually, I have a hard time letting Ana go.  She does sort of keep me company, and she does sometimes give me the illusion that by controlling food, I’m controlling my life and managing overwhelming problems.

At the end of the day the truth is that Ana was born during the time I was being abused as a teenager.  Ana promised me things, and she deceived me into thinking that if I was smaller and took up less space I’d be safer.  But I wasn’t safe, I almost died.  And then when I was in imperfect recovery, I was abused again and again.

Ana doesn’t keep me safe.  Eating disorders have the highest mortality rate of any mental illness, especially among young woman.  They aren’t a choice and they do destroy lives.

I still have some hope that I will let Ana go, instead of fumbling along in imperfect anorexia recovery forever.