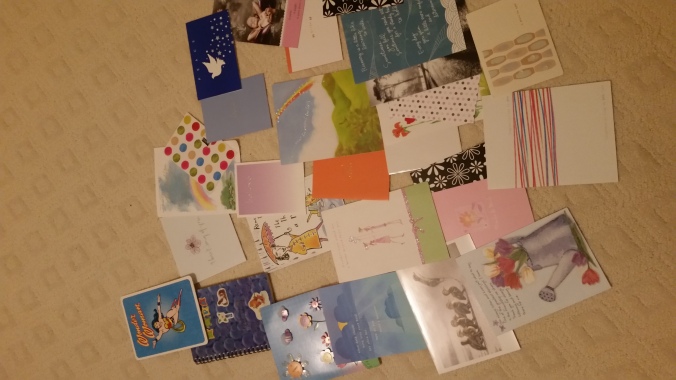 One of the bright sides of spending so much time in hospitals during my teens and early twenties is the people I met there.  Some of them became lasting friends and the bonds between us defied understanding by outsiders.

If you’ve never spent a significant amount of time as an inpatient in psychiatric wards and mental health treatment facilities you probably won’t understand.

These comments miss the point for a number of reasons.

First of all, if my “friends with problems” aren’t worthy and I shouldn’t be friends with them, does that mean nobody should be friends with me either?  In case you hadn’t realized from reading this blog, the secret is out.  I identify as living with mental illness! I’m not exactly 100% well myself, otherwise I wouldn’t have been in the hospital in the first place!  Does this make me less of a good friend?  Does this make me a person who should be shunned and avoided?  I certainly hope not.  I would like to afford my other hospital friends the same courtesy.

Two, it’s hard for people who are mentally well, neurotypical, never struggled with severe mental illness to understand me.  Sure, I have well friends who empathize and who don’t judge me.  But the bonds and mutual understanding I’ve shared with other people who struggle with PTSD, eating disorders, depression and suicide are very strong.   It’s like I can breathe again, when I talk to a friend who I know “just gets it.”

Three, when you are living in a hospital ward, you naturally form friendships and alliances with the people you are living with.  Some of them become friends.  It happens and it helps us survive.

So please, don’t judge these special friendships.  Even when I’ve lost friends to suicide, even when I’ve been triggered by friends and had to set boundaries, even when it feels like listening to their struggles is too much to bear, I never regret them.

My dear friends who are gone.  I desperately miss that feeling of belonging I had when I talked to you, laughed with you.  MJ, there was never anything I shared about PTSD that you hadn’t breathed and experienced yourself.  I never had to explain myself, you just knew.  This blog entry’s photograph is a picture of all the cards you wrote to me during our friendship.

Who else could I share my strange experiences with?  When I told her one day, crying in the bathroom in my ex-husband’s house, that I was scared because I thought I was seeing X everywhere.  I literally thought I could see him all around the city.  Intellectually, I knew he wasn’t there, but it felt real and my heart skipped a beat each time.   She almost laughed and said, “It happens to me all the time.  I see everywhere too”  We breathed out together, suddenly this PTSD symptom was normal and okay.  We understood each other, we weren’t crazy.  I loved her for this and I know she loved me for it too.

When I was in treatment for anorexia when I was 17, I met another young woman named M.  She and I were stuck on the eating disorder for 5 weeks together, while other patients attended groups.  We were on “modified activity phase” until we gained a certain percentage of our goal weight and it took forever.  During this time we talked, bonded and sometimes sneaked around doing things we should not have.   She was painting rocks when I got there.  I asked her what I was doing and if I could help.  She told me she wanted to paint 1000 rocks so her wish would be granted.  Soon, we had an assembly line going.  We would fill our pockets with rocks on our 15 minute outside break, sometimes walking further than we should have away from the break area.   Once inside, I would paint the rocks a solid colour, then when they dried she would write “Expect a Miracle” in careful lettering on each one.  The final step was applying a clear glaze once all the paint was dry.   We painted so many rocks, I don’t remember how many we had finished when I discharged myself 3 months later.  I still have some of them in my bedroom almost 20 years later.  I’m still waiting for a miracle.   I often wonder what happened to M.  We lost contact and I still think of her often.  I wonder if her miracle came true and I wonder if she recovered.

I met my friend Lexi at a support group in my city.  It was the first place I really talked at any length about leaving my ex-husband and what was going on in the marriage.  Lexi loved to crochet and knit.  She loved her family.  I used to go to her apartment sometimes and we would chat about all sorts of things.  Sometimes we shared stories of our trauma and sometimes we joked and laughed about our future.  I was inspired to try online dating because of Lexi.   I lost her suddenly last summer, about  a year ago now.  I still miss her.

Darlene, whose story I recounted in another blog post, her anniversary was this week.  14 years ago I lost her.   I wish I’d had the chance to know her better, but I won’t ever forget her.

Some friends like my dear sister LJ, I have kept in contact with for over 12 years, through email, fb, text and phone.  She lives in a different country, but she calls me sister.  I miss her and I hope to see her again one day.  I have ever letter and card she has ever sent me. She has inspired me in many ways and her commitment to recovery and to survival is tremendous.

My friend John, he is also gone now.  But his music lives on and I have his CD which I listen to from time to time and remember his gentle courage.

I will never forget the stories of survival I heard and witnessed during my hospital stays.  I met so many survivors.  I met war veterans who were kind and brave enough to share small details of their own private hells with me.  I met residential school survivors who shared with me the abuse they endured.  I met childhood abuse survivors who overcame.  I met women who were admitted to the hospital in full psychosis, speaking in delusions and making little sense.  I saw those same women, mere days later, completely calm and rational again after taking their medication.  I met people who had lost family members in tragic circumstances.  I met people who had nearly died from multiple heart attacks due to anorexia and bulimia and some of those women have children and are well and healthy today.

Inpatient bonds are something to be celebrated.