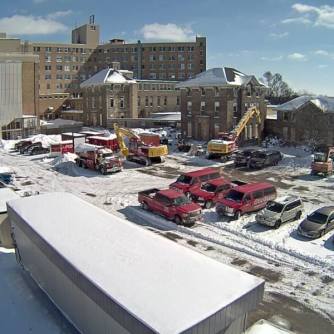 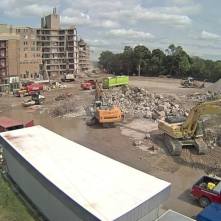 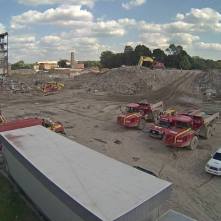 I’ve been thinking about South Street.   It’s been completely demolished now, destroyed and decommissioned but it’s still alive in my memory.

I haven’t written many posts about being in the hospital since I started this blog almost a year ago now.  Those were first posts, the first thoughts on my mind which I wanted to share.

I think people who have never spent time on a psych ward often have a dark curiosity about what they might be like.  I find myself filled with the same morbid curiosity as I search through pictures of the abandoned South Street hospital online.  How can a place where I survived so much just be demolished?  On one hand I’m glad it is gone.  It was a horrible place!  On the other hand, I feel like it should have stood there forever as a monument to the suffering and the intensity I felt there.

What were days like as a patient at South Street?

The days varied slightly depending on which unit I was on.  There was something comforting about the meals being delivered on neatly organized trays.  In the morning you could select your choices for the following day, marking them off on a paper slip.  The selection for vegetarians was rather poor.  The food in general was awful, but they would bring me a peanut butter and jam sandwich for lunch.  I wrote in my request beside the offered choices.   In the morning there were little boxes of cereal and tiny muffins.  Breakfast was always my favourite meal.   For your first day or two, your meals are delivered directly to your room.  After that you were encouraged to eat with the other patients in a small dining room which was unlocked at meal times for this purpose. I never ate there.  I carried my tray carefully back to my room where I ate alone.  The meals arrived like clockwork at 8AM, 12PM and 5PM.  You could order ginger ale as a snack or a treat, it arrived in a paper bag with your name.   I used to order Colt diet ginger ale, but I’d use the edge of the can to hurt myself, I never drank the pop.   Dinner was the worst meal.  There were a selection of about 4 different vegan dinners that came in plastic trays, preheated.   I would peel the plastic wrap off and sample them, sometimes eating very little.   The arrival of the trays marked the passage of time through the day and the long hours after dinner stretched out, especially if you didn’t have a visitor.

Medication times were another way to tell the time.  At first my nurse would come to my room to give me the selection of pills (at one time I was taking more than 11 pills a day).  After settling in, patients reported to the nursing station at set times to receive their pills.  Each pill came in a tiny sealed plastic bag, labelled with my name and patient number (I still have it memorized!).  The nurse would check my wristband carefully against the name on the plastic bags.  Then the nurse would rip them open carefully and tip the pills out into a small paper cup or into my hand.  I would get another small cup with water and the nurse would watch me swallow the pills.  Night time medication was always greatly anticipated as it marked the end of the day and the time at which it was acceptable to go to sleep for the night.  Realistically, on high doses of anti-anxiety and anti-psychotic medication I often slept during the day as well.   Floating in between high levels of anxiety and thoughts of self harm and suicide, and drugged, sluggish, words slurred together medication induced slumber.

There were no cell phones at that time, difficult to imagine!  There was a Bell payphone at the end of the hall in the TV lounge area.  There was a black leather chair you could sit in while you were on a call.  There was another payphone halfway down the hall, at the edge between the Y and Middlesex portions of the 7th floor (older and comparatively newer parts of the wing).  Talking on the phone to friends and family members was one way to pass the time.  Some patients also sat in the TV room watching whatever was on. I rarely sat there, preferring to stay in my room or in the room of a co-patient I had befriended.

If you were upset, you could ask to speak one on one with your nurse.  There was a small room attached to the nursing station where we could sit.   Sometimes the nurses would speak to me in my room.   The psychiatrist would visit once every few days.  These visits were highly anticipated.  Sometimes I would wait around the floor for hours, figuring that my Dr might check in on me.   Visits from the psychiatrist meant changes in medication, changes in privilege levels, and often discharge from the hospital.  The doctor generally just spoke to me in my room, even when the room was shared with 1-3 other people.  The level of privacy on the psych ward was very low, unless you were lucky enough to be moved to a private room.

Private rooms were highly coveted.  On the psych ward private rooms had nothing to do with the insurance coverage you had and everything to do with privileges.   When I arrived on the 7th floor I was generally in a ward room, 4 beds separated with curtains.  I didn’t mind this as long as I had one of the two beds by the window rather than one of the two beds by the door.   Patients who just arrived on the unit were placed in the ward rooms closer to the nursing station.  Aggressive or self destructive patients were placed in these rooms.  If I stayed longer, I would often be allowed to move further down the hall, further from the nursing station and closer to the exit (both literally and symbolically).   I loved the single rooms which had their own washrooms.  All the rooms had these chain link grills over the windows, but some of them did open a crack.   There were also double rooms, some of which did not have washrooms.  There was a shared shower room.  It had space for 3 people to shower or bathe at the same time, but the showers were separated by curtains.   Rumors circulated that people had completed suicide in these shower rooms and all the patients believed them.  There was also a laundry room where longer staying patients could wash their clothes.

The best part of staying at South Street was that I was generally allowed to come and go for brief periods on my own.  Sometimes I was allowed only on hospital ground, in which case I would go down to the patio at the back of the building.  This was a place where smokers could smoke and psych patients who were not allowed to leave could get some fresh air.  I would go down there with fellow patients sometimes and it was almost like an outing.  Smokers looked forward to the scheduled times we were allowed to leave the unit.

Other times I was allowed to go for short walks around the neighbourhood.   I used to walk down to the river by the hospital.  I’d walk around the streets in the area.  Sometimes I’d walk to Tim Horton’s and buy a piece of caramel coffee cake.  There was a walking path along the river to a small waterfall.  I know we sometimes though of jumping into it.  There were ducks which could be fed if you ordered extra bread with your meal.  Sometimes I walked alone, sometimes with visitors and sometimes with other patients.   I made some friends at South Street.  A few of them I still stay in touch with today.

Ironically enough, many of the patients were allowed to basically come and go as they pleased.  At night the door was locked and you needed permission from your psychiatrist to have a pass home for the evening or overnight.  Sometimes I had accompanied passes which meant my boyfriend had to sign me in and out.  Other times he would just drop me at the front entrance.   Ironically, though I was often admitted to the hospital for self harm and suicidal thoughts or attempts, I was still allowed freedom to leave the floor unaccompanied.   In reality I could have harmed myself pretty much anytime I wanted, even when in the hospital.  Sometimes I did, but other times I didn’t.

I often wonder exactly what made the hospital safer than being at home.   I think it was the thought, or the hope, or the desperate idea that it was safer which kept bringing me back there.  I was almost hypomanic and highly impulsive about self harm while I was taking anti-depressants.  I felt unsafe, I thought I’d be safer in the hospital, admitted myself then realized I felt trapped.  I was generally a voluntary patient, so I soon discharged myself and the cycle began again.  I never really felt safe anywhere.

Sometimes the hospital was a comfort.  The routines, the quiet, the break from real life.

Sometimes the hospital was terrifying, like when one of my roommates was cutting and snorting cocaine in our shared washroom.  Leaving blood and white powder traces for me to find.   Like when a patient who dressed in black and openly worshiped Satan was restrained by multiple security guards and wheeled down the hall on a gurney screaming.   Like when an old man came up behind me in the hall and placed his hands around my neck, whispering that he would kill me.  Like the blood stains on the 7th floor carpet, from where a man had been seriously injured trying to escape.

There was  tenuous grasp on order there, and we all knew it.   Sometimes people think of the psych ward as being filled with crazy people.   But in reality, I was neither more nor less crazy than the other people there.  I wasn’t psychotic, like some of them were, but I was destructive and depressed.  Everyone was there because they weren’t safe.  Our reasons were different, but the result was the same.  We all lined up for our pills.  We all ate our meals off plastic trays.  Some of us were allowed real cutlery and others only plastic.   The lines were drawn in terms of privileges, delineating various levels of “crazy.”  But in the end we were all there together.  We were all psych patients.  I see myself as being no different from the others.

Even today, over a decade later, there is a part of me that still holds that identity.  The identity of being on a psych ward, of being hospitalized against my will.  It did change me and it did shape me.  But it no longer defines me.