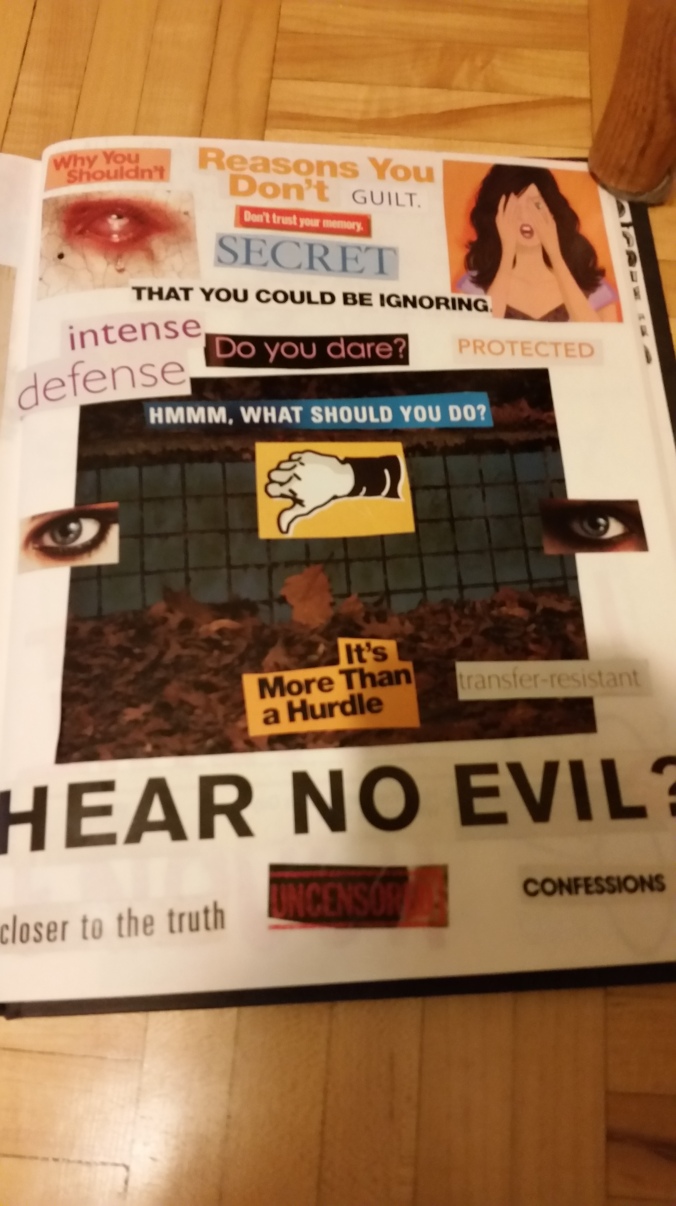 The reality is I didn’t even realize I was being abused until long after the abusers had intertwined their lives with mine.

The reality is that abuse in relationships does always not look the way you might expect it to.

The reality is that I spent a long time, as an adult, in counseling, volunteering at a women’s centre etc…stating to other reasonable adults “it was ‘just’ sexual abuse.”  I made all sorts of excuses for why it didn’t count, why it wasn’t important, why it wasn’t real abuse, why I didn’t deserve help, why other people had it worse off, why I was making a big deal over nothing, why I didn’t want to tell anyone and ruin his life etc.

I was (and am) pretty mean to myself and a lot of my perceptions were just plain wrong.

I think it takes a lot of strength and courage to really come face to face with the fact that your romantic relationship is unhealthy, abusive and actively making you sick.  It’s not something that comes easily, turning your back on the father of your children.

I did start to talk about the abuse.  I did tell people.  In some ways, I wasn’t really challenged by those people.  I think many of them instinctively knew I wasn’t ready to leave.  They knew I needed time to come to the realization that it was abuse and that I needed to get out.  For the most part they didn’t push me.  I was still ambivalent about the abuser and I still wanted things to “work out.”

One day someone I volunteered with called me out.  I mentioned something about it being “just” sexual abuse.  She challenged me.  She sat there and said “what you are saying doesn’t make sense.  It’s not ‘just’ sexual abuse.”  I think it was the first time someone had openly called me out on my own denial.  This was in the month or 2 leading up to my decision to leave.

I was wrong.  Sexual assault is not about sex.   It’s about power and control.  It’s about a level of narcissism that exists in this world that allows one person to disregard the consent of another person.  Within any type of relationship it’s about manipulation, it’s about gaslighting, it’s about making the victim feel crazy, worthless, broken, damaged, and most of all dependent on the abuser.   The sex is a tool of control.  It rarely happens in isolation.  Emotional abuse, psychological abuse, physical abuse, threats, coercion…it’s all part of the same package.  Even if the package is wrapped in a disguise that makes you believe that sex is the only issue and that otherwise the person is “basically a good guy.”

It’s a long road back from that place.  The place where you question whether your needs are reasonable, valid or even exist.  It’s a long way back from the place where you believe that your consent is not relevant, where your needs are not relevant.  Where you are blamed for not wanting to consent, even in a situation where there is no trust, no safety and almost no relationship left.

I’m writing this to tell you:

I believe you.  It’s not your fault.  It counts.  It’s is real.  You deserve support.