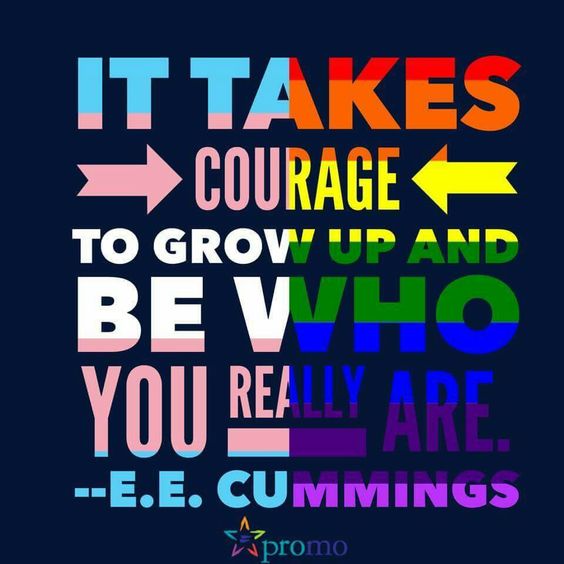 I was an adult when I acknowledged my feelings of attraction to women and gender non-conforming folks.  I was in my mid 30s before I began coming out as bisexual and then finally queer.  Some people I know STILL assume I’m straight.  I’ve been told over and over that I “don’t look queer” (whatever that even means!!).  Some people think I “just like rainbows!”  That makes me laugh.   As time goes on, I make more and more slow steps into the realm of “coming out” and living as my own queer self.  I even have a gay agenda! (my agenda is literally decorated with rainbows).

At the end of the day, I don’t fit into a binary of sexual identity.  I’m neither gay nor straight.  I identify as queer which to me means I’m open to dating anyone who isn’t an abuser, but my preference is to date women and gender non-conforming folks.  My primary sexual attraction is to those who are not cis-gender men.

Yes, I was married to a man.  Yes, I dated men throughout most of my life.  No, that doesn’t mean I’m straight.  And for the record, if I date a man again I STILL won’t be straight.  I’m not heterosexual when I date men or gay when I date women.  I’m queer and I’m always queer.  The rainbow pins on my bag, and rainbow jewelry is not just “because I like rainbows.”  It’s a symbol of identity and pride.

Heterosexual people are really fond of assuming everyone is straight.  I call this the straight agenda!  We are surrounded every day with images and representation that teach us that heterosexuality is “normal” and ” neutral” and people who identify as gay, bi, pan or queer are “other” and “different.”

I identify as queer because I reject this binary.

I still struggle with being openly “out.”   It’s new to me, I’m self conscious and I feel different.   I think I fought it internally for a long time because I didn’t want to feel different in another way. Recent political events and news worldwide makes it difficult to be proud and confident as an out queer person.  I see other gay, trans and queer people being discriminated against and even killed worldwide and it impacts me.  It makes me more afraid to be out.

As part of my journey of recovery and healing from violence, I’ve been reflecting on and exploring my sexuality and also my gender identity.   I realize that as a child and teenager I didn’t know any openly gay women.  I didn’t know any trans folks (as far as I know).  As I’ve grown up, I’ve learned that many people I knew as a youth identify as trans, queer, gay etc. adults, but as a youth I only knew a few gay male friends.

I didn’t even know that being gay/queer was an option for me.

But now I do. and whether I was born this way, or grew up this way as a result of trauma, this is me.  I’m here and I’m queer.

Most people in my life don’t know that I’ve also been exploring my gender identity.  I’m still very much “in the closet” about this journey.  It’s much more recent and my reflection on it came about after speaking to and listening to many gender non-conforming folks and finding elements in common with their experiences.

I experience body dysphoria and have since I was 9 years old.  I’ve come to realize that this isn’t entirely related to anorexia or to sexual abuse.   I’ve engaged in self harm in ways that don’t always make sense.  I won’t get into that here, but I’ve come to reflect on the connection, not just with coping with trauma, but with my gender and gender identity.

After a lot of refection and some discussion in counseling, I’m now most comfortable as identifying as:

What does this mean?  It means that like my sexuality, my gender does not fit neatly into a binary. 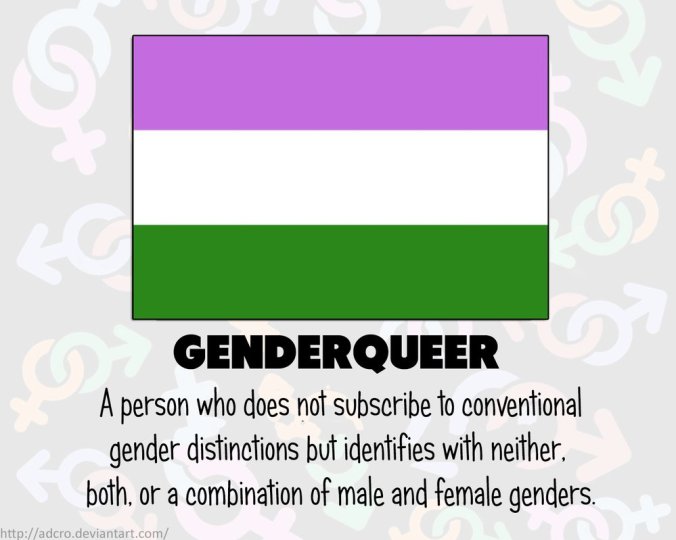 I’m still exploring exactly what this means for me.  It has more to do with my gender identity (how I feel inside and how I relate to myself) than it does with my gender expression  (how I present my gender to the outside world).

So this is me.  I’m coming out of the closet again.  I’m queer and gender queer.

I’m on a journey of self discovery and healing.  I hope you can wish me well.

2 thoughts on “Closets are for clothes.”